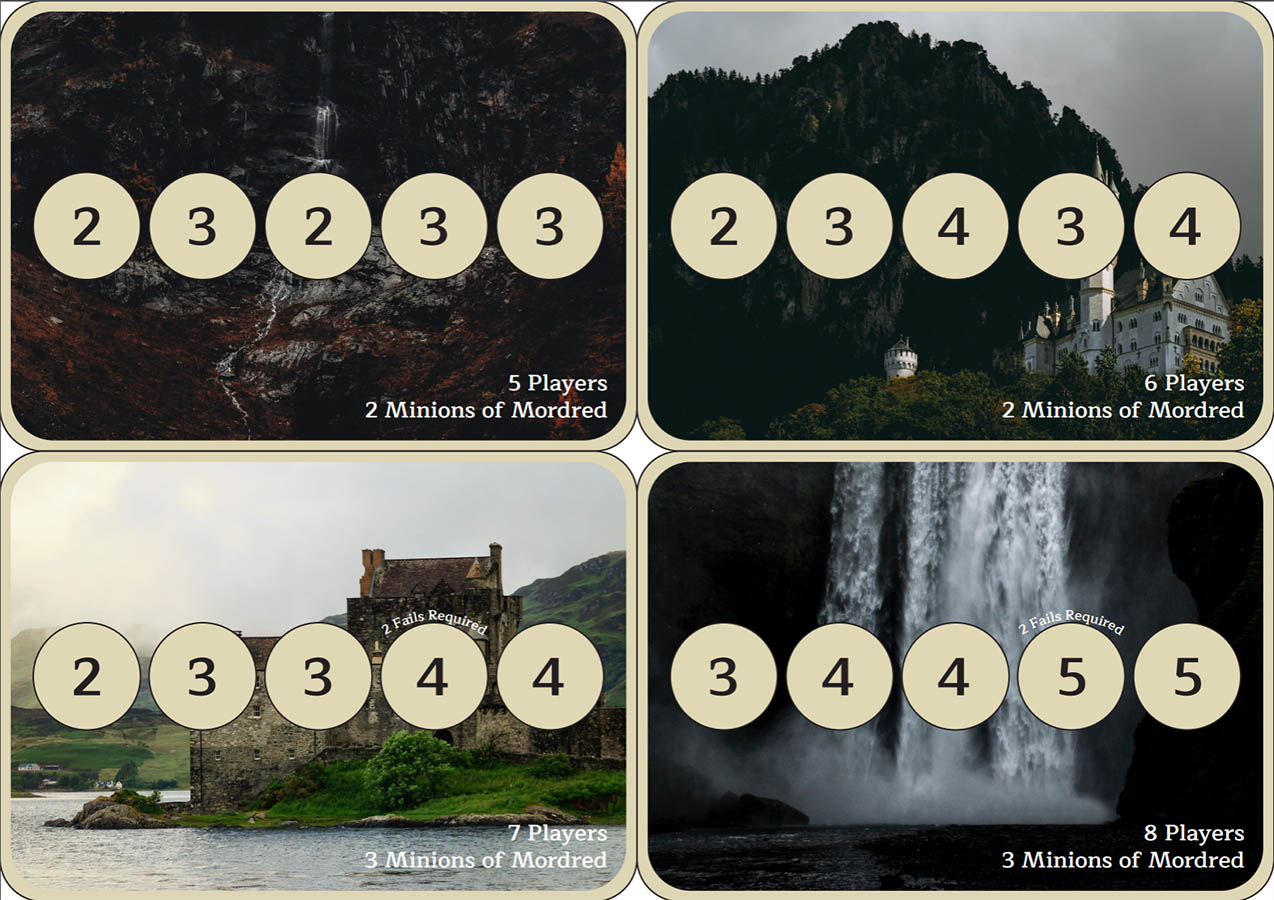 This project started life as bits of paper with names written on that I created to play Avalon with my family while my real copy of the game was in another country. When I got home I decided to polish up the concept a little for anyone else stuck in a similar situation.

Avalon is a re-skinned version of the popular party game The Resistance, for 5 to 10 players. It is a hidden role game pitting two teams against one another: the loyal servants of Arthur led by Merlin aim to succeed quests while the minions of Mordred must fail them without being discovered.

This print-at-home version is designed to allow anyone to print their own version of the game. The cards and boards are in different files as only the cards are required to play. Separate quest voting cards have been omitted from this redesign to keep material requirements to a minimum; players instead can vote with their team approval/rejection cards as these are designed with identical backs.

Shameless plug for my Avalon Companion App which can handle all the basic rules for you!

Deal each player a character card which they must keep hidden from other players until the end of the game. Set up the correct quest board for the number of players you have.

Merlin Looks into the Future

Once everyone has privately viewed their card, one player should read out the following:

One player starts as “leader” and proposes the first quest team. All players vote together with their voting cards.

If the majority of players approves the team (teams fail on a tie), players on the team secretly enter either a “succeed” or “fail” vote face down (placing the other card also face down in a different pile). These cards are shuffled and revealed, and if any fails are entered the quest fails; otherwise, the quest succeeds. If the team is rejected, the position of leader moves one place clockwise and the new leader proposes a team. If five teams are rejected in a row, the Evil team immediately wins.

The table below shows how many players must participate in each mission. Missions marked with an asterisk (*) require two fails for the quest to fail.

End of the Game

Percival is a loyal servant of Arthur who wakes up and sees Merlin’s identity at the start of the game. Percival will make the Good team more powerful as they will be able to trust Merlin, and can pretend to be him.

Morgana is a minion of Mordred who appears to be Merlin to Percival. Morgana makes the Evil team more powerful as Percival may be confused as to who to trust.

Oberon is a minion of Mordred but does not reveal himself to the other Evil players, and does not see them. Merlin still sees Oberon, balancing the game in favour of the Good team.

Lady of the Lake

The Lady of the Lake is not included in this printable version of the game. If your group wants to play with her, you should be able to use the normal voting cards to share your team and add any kind of marker (e.g. a coin) to represent the Lady.

View this project on GitHub